History Of Brothers In Arms

At Brothers in Arms we put our heart into full-bodied wine that is true to the estate and true to the region. Our wines showcase our quality fruit and reflect the spirit of our family tradition. Since being established in 1998 we have achieved national & international recognition for our Brothers in Arms bottled beauties.

Without doubt our greatest strength is being such an integrated business. We are in control of the management of our soils, pruning regimes, canopies and irrigation in the vineyard right through to deciding when best to bring the fruit into the winery. We don't feel the pressure to work to anyone else's requirements at vintage and can therefore coax and nurture our ferments how we choose, allowing our Viticulture and winery teams to work closely together building skill sharing and teamwork.

This integration hasn't happened by accident or just good fortune. Guy has always had a very clear vision about where he wants the businesses to go and is an exceptionally good strategic planner. He has been through too many "bad" years with primary production to rely on one income stream alone. He is also an unbelievably hard worker and with Liz supporting him has been able to achieve some really marvellous outcomes.

The first vintage saw only 5 tonnes of Shiraz produced, a volume which has now grown to over 700 tonne per year. In all 212 hectares are planted to vines with the balance of the 1000 Ha (2,500 acres) property given over to Merino sheep and cropping.

Guy and his wife Liz have a clear vision for Brothers in Arms—to showcase what they believe the vineyards are capable of. With the construction of the winery in time for the 2002 vintage, the focus of the winemaking discipline is simple: balance, structure and texture. “by concentrating on these three key elements we find that all the other attributes revolving around fruit, oak, tannins, length of flavour, etc. fall into place” explains Guy.

With two children Myles and Emily (the 6th Generation—hence the No 6 range of wines) Guy & Liz head up a dedicated team that are proud to produce wines that are true to the estate and true to the Langhorne Creek region.

Although our original focus was on Shiraz the wines in our portfolio have evolved over the past decade and we now produce all estate grown Shiraz, Cabernet Sauvignon, and blends thereof which showcase Langhorne Creek's ability to offer elegant wines with balance, structure and texture. Very soon we will be releasing our first estate grown Malbec which is truly exciting.

Brothers in Arms is very much a family concern. As the owners, Guy & Liz Adams are involved in all aspects of the business on a daily basis. It’s not surprising really as they live on the vineyard only 2 minutes down the road to the winery.

The homestead is the hub of everything as well as being the domain of their 2 children, Myles & Emily. They are the 6th Generation to live at Metala and are the inspiration for many things, including the No.6 label.

In 1998 we decided to take the hobby Guy shared with his brother Tom and late father Stuart to a new level.

As we continue to be the custodians of the Metala property our vision moving forward is to respect the lessons learned in the past while seeking out innovative approaches to our future. 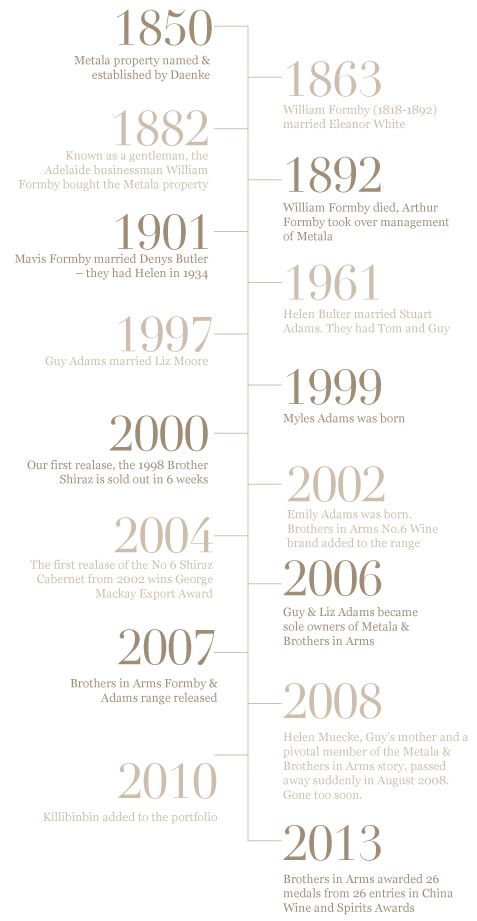 In 1882 William Formby bought the Metala estate from the original settler, an eccentric Prussian called Herman Daenke. He and his wife Eleanor and their eight children moved from Wayville in Adelaide and so became the first generation of our “Metala” story. William, a horse dealer and importer by profession, intended to set up a horse stud and spelling place for the animals he provided for the stage coaches running from Adelaide to Melbourne.

Arthur Formby, the 2nd son of William who was married to Elsie Landseer, took over the management of Metala in 1890 and with his brother Fred purchased Metala from their father’ estate in 1894.Their partnership was dissolved in 1902. Under Arthur’s ownership the property grew to its present size of 2,500 acres.

From the late 1890s until 1910 Arthur Formby made his own wines in a cellar adjacent to these early plantings. Some of the old open fermenters are intact today. As well as his responsibilities of running the larger farm Arthur found attending to the winemaking a rather formidable task and so in 1910 came to an agreement with his brother-in-law Ronald Martin that saw Stonyfell take over the winemaking tasks. They continued to make wine from the Metala fruit on the property until 1955. At this time, owing to the difficulties of finding suitable hands and also the emergence of motor transport, it became simpler to truck the grapes to Stonyfell for processing. The cellar on Metala was closed and many of the red gum vats were transported to Stonyfell. These old cellar sheds still stand today and are now used for the storage of machinery, much of which is used in the vineyard.

Arthur & Elsie had 2 children; Myles & Mavis. Myles left Australia to pursue a career in England as an ENT specialist. Mavis married Denys Butler and they together managed Metala until Denys died too soon in 1972. Their only daughter, Helen, had married Stuart Adams by this time and they lived at his property in Finniss. Helen then became heavily involved in the management of Metala. Guy, the 2nd son, stepped up and took over the full management of Metala on leaving school and from that time on the property and business has flourished. Sadly, Helen passed away very suddenly in August, 2008 aged 73 years.

Over the generations we have nurtured the estate and now, through marriage, carry the Adams name. In looking forward, while being faithful to the past, we seek new ways to highlight wine style, regional character and limited impact on the land so it may continue to thrive for generations to come.